Alumni both young and old have interesting stories, but we all call Methodist “home.” 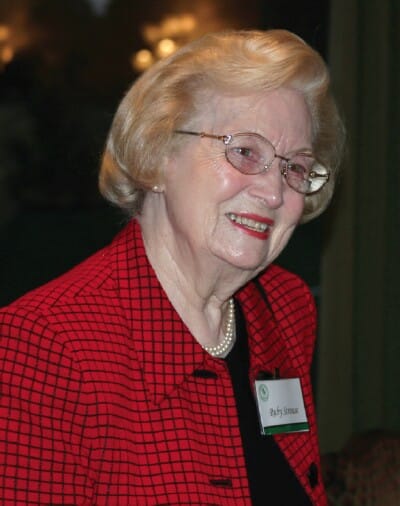 Ruby Strouse ’80 had lived half a lifetime before enrolling at Methodist College. At age 49, as a widowed military spouse living near campus in the Kinwood subdivision, Strouse found a home among her classmates and professors.

Strouse, a native of Lumberton, N.C., met her husband at a New Year’s Eve Party at Fort Bragg. They were married in 1956 when she was 18.

Ruby’s husband, LTC William Richard Strouse, was deployed to Bangkok, Thailand early in their marriage. “I had never been in Southeast Asia before, so everything about it was new to me,” she said. Like so many military families stationed overseas, Ruby and her husband traveled whenever they could. They would often hop on training flights out of the Philippines to visit surrounding countries like China and India. Her favorite place was the Taj Mahal.

But whether overseas or living in Fayetteville, Ruby always delved into her own projects. While her husband worked, Ruby held jobs in Bangkok, one at an English language school and another as an English teacher at Thammasat University. It was there, working with undergraduate students applying to graduate schools in the United States, that Ruby first seriously considered her own college ambitions.

After years of travel, Ruby and William settled back in Fayetteville in the early 1970s. Ruby went back to work in a dental office and the couple built a house in the Kinwood neighborhood, just north of campus.

Unfortunately, William died in 1973, leaving Ruby to forge a new path for herself. During this time, she and her dog, an Afghan Hound named “Golden Trumpet,” took daily walks together around the neighborhood and through campus.

“I could hear all the sounds from the different games they played on the Methodist campus, and I could tell there was a lot of exciting activity,” she remembers.

Ruby stayed active in her church and with friends after her husband’s passing. Then, at age 49, Ruby found her next adventure – earning a business degree. She enrolled at Methodist in 1976, and, despite being twice as old as most of her classmates, Ruby found a new community that made her feel at home.

“People were just so kind. Even the young students treated me like I was one of them,” she recalls. She fondly remembers her English professor, Dr. Bob Christian, with whom she shared her love of language. She recalls her business professor, Dr. Sid Gautam, as a lovely, patient person who taught her all about the stock market.

Unlike in her work with university students in Bangkok, however, Ruby was dedicated to her own studies at Methodist. When asked if she mentored any of her younger Methodist classmates, she replied, “No, I was too busy studying!”

After graduating in 1980, Ruby quickly accepted a job at the local Employment Security Commission. This was during a time of high unemployment and the office was always busy.

Outside of work and in retirement, Ruby continued her life of projects an learning. With her friend, French-born Martha Duell, she helped establish the Lafayette Society in 1981 and visited France four times with the group.

Ruby served as a member of the Methodist University Alumni Board for years and consistently and faithfully supported her alma mater with her talents and treasure.

Strouse moved from her Kinwood home in 2010 to Penick Village in Southern Pines, N.C. Today, at 93, Ruby admits her eyes are getting blurry and some memories take longer to access, but she treasures her friends and her Methodist yearbooks, especially to help pass time during recent periods of quarantine due to the COVID-19 pandemic. While reminiscing on a recent phone call, she said, “I hope there have been other people who gained as much as I have from being there.”