Nearly a hundred members from the greater Fayetteville area made a special visit to campus on Wednesday, Nov. 2, to participate in the University’s two tournaments at Downback Golf Course and the Gene Clayton Tennis Center, respectively.

The event is an annual, once-a-year opportunity for the public to play on the private, on-campus facilities that are considered some of the best in the nation. The tournaments also raise funds for the University’s Loyalty Campaign, which supports student scholarships. 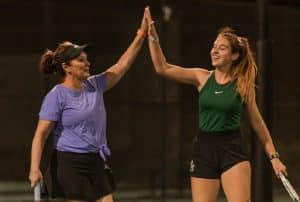 “It’s a wonderful set of events offered by the University,” said Myers Coggin, president of the Methodist University Founders Council. “These events certainly showcase the facilities and the University, while providing the community an opportunity to see what’s here on campus.”

Although the Founders Council originated on July 1, 2021, the group has roots older than the school itself. Before the then-named Methodist College opened in 1960, community leaders gathered pledges and donations from the local community to build the campus.

To view photos from the tournaments, keep tabs on the Methodist University Flickr page.